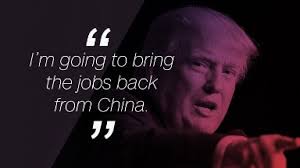 CAMBRIDGE – As US President Donald Trump proceeds to destabilize the post-war global economic order, much of the world is collectively holding its breath. Commentators search for words to describe his assault on conventional norms of leadership and tolerance in a modern liberal democracy. The mainstream media, faced with a president who might sometimes be badly uninformed and yet really believes what he is saying, hesitate to label conspicuously false statements as lies.

But some would argue that beneath the chaos and bluster, there is an economic rationale to the Trump administration’s disorderly retreat from globalization. According to this view, the US has been duped into enabling China’s ascendency, and one day Americans will come to regret it. We economists tend to view abdication of US world leadership as a historic mistake.

It is important to acknowledge that the roots of the anti-globalization movement in the United States run much deeper than disenfranchised blue-collar workers. For example, some economists opposed the Trans-Pacific Partnership (a 12-country trade deal that would have covered 40% of the global economy) on the questionable grounds that it would have harmed American workers. It fact, the TPP would have opened Japan far more than it would have affected the US. Rejecting it only opens the door to Chinese economic dominance across the Pacific.

US populists, perhaps inspired by the writings of Thomas Piketty, seem unimpressed by the fact that globalization has lifted hundreds of millions of desperately poor people in China and India into the global middle class. The liberal view of Asia’s rise is that it makes the world a fairer and more just place, where a person’s economic fate does not depend quite so much on where they happen to have been born.

But a more cynical view permeates populist logic, namely that in its excessive adherence to globalism, the US has sown the seeds of its own political and economic destruction. Trumpism taps into this sense of national mortality; here is someone who thinks he can do something about it. The aim is not just to “bring home” American jobs, but to create a system that will extend US dominance.

“We should focus on our own” is the mantra of Trump and others. Unfortunately, with this attitude, it is hard to see how America can maintain the world order that has benefited it so much for so many decades. And make no mistake: America has been the big winner. No other large country is nearly as rich, and the US middle class is still very well off by global standards.

Yes, Democratic Presidential candidate Bernie Sanders was right that Denmark is a great place to live and does many things right. He might have mentioned, however, that Denmark is a relatively homogeneous country of 5.6 million people that has very low tolerance for immigration.

For better or for worse, the globalization train has long since left the station, and the idea that one can turn it back is utterly naive. Whatever might have been done differently before US President Richard Nixon visited China in 1972 is no longer possible. The fate of China, and its role in the world, is now in the hands of the Chinese and their leaders. If the Trump administration thinks it can reset the clock by starting a trade war with China, it is as likely to accelerate China’s economic and military development as it is to slow it down.

So far, the Trump administration has only sparred with China, concentrating its early anti-trade rhetoric on Mexico. Although the North American Free Trade Agreement, which Trump reviles, has likely had only modest effects on US trade and jobs, he has attempted to humiliate Mexicans insisting that they pay for his border wall, as if Mexico were a US colony.

The US is ill-advised to destabilize its Latin American neighbors. In the near term, Mexican institutions should prove quite robust; but in the long run, Trumpism, by encouraging anti-American sentiment, will undermine leaders otherwise sympathetic to US interests.

If the Trump administration tries such crude tactics with China, it will be in for a rude surprise. China has financial weapons, including trillions of dollars of US debt. A disruption of trade with China could lead to massive price increases in the low-cost stores – for example, Wal-Mart and Target – on which many Americans rely.

Moreover, huge swaths of Asia, from Taiwan to India, are vulnerable to Chinese aggression. For the moment, China’s military is relatively weak and would likely lose a conventional war with the US; but this situation is rapidly evolving, and China may soon have its own aircraft carriers and other more advanced military capabilities.

The US cannot “win” a trade war with China, and any victory will be Pyrrhic. The US needs to negotiate hard with China to protect its friends in Asia and deal with the rogue state of North Korea. And the best way to get the good deals Trump says he seeks is to pursue a more open trade policy with China, not a destructive trade war.

* Professor of Economics and Public Policy at Harvard University and recipient of the 2011 Deutsche Bank Prize in Financial Economics, was the chief economist of the International Monetary Fund from 2001 to 2003. The co-author of This Time is Different: Eight Centuries of Financial Folly, his new book, The Curse of Cash, was released in August 2016.