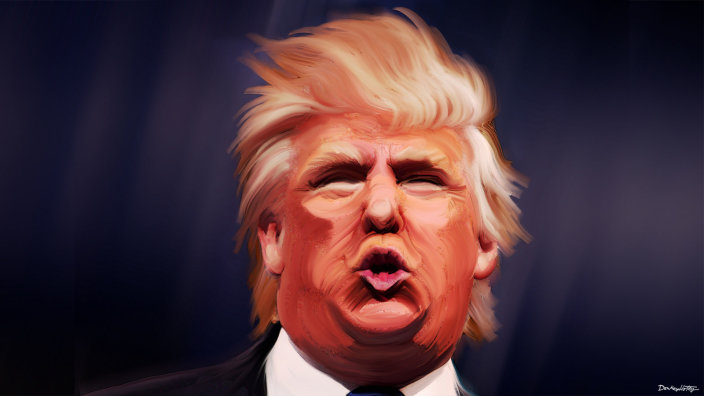 Donald Trump is dangerous for our country. His impulsiveness and lack of control over his own emotions are of concern. It is our patriotic duty to raise the question of his mental stability to be the commander in chief and leader of the free world. Mr. Trump appears to exhibit all the symptoms of the mental disorder Narcissistic Personality Disorder (NPD).

Mental health professionals need to come forward and urge the Republican party to insist that their nominee has an evaluation to determine his mental fitness for the job. It is entirely possible that some individuals with NPD can successfully function in many careers, but not the Presidency of the United States. We deserve to have the greatest understanding of Mr. Trump's mental health status before we head to the polls on November 8th, 2016. #DiagnoseTrump
So far in his campaign for President of the United States, Donald Trump has unabashedly exploited fears for political gain. His trolling-tweets alone have helped damage our country's relationship with foreign allies - threatening our national security. His divisiveness has only served to make us less safe. 6,000 lawsuit and one failed Trump University later, we have seen his ruthless business practices on full display, ripping off thousands of hard working Americans - without remorse - to put an extra dollar in his pocket. #DiagnoseTrump
The American Psychiatrist Association has declared it unethical for psychiatrists and psychologists to “comment on an individual’s mental state without examining him personally and having the patient’s consent to make such comments.” I call on mental health professionals to publicly urge the Republican party to conduct an evaluation of Mr. Trump and officially determine if he is mentally fit to lead the free world. #DiagnoseTrump
Mr. Trump appears unable to control his compulsion and displays characteristics of all nine criteria to officially diagnose an individual with Narcissistic Personality Disorder.  #DiagnoseTrump
If you believe Trump has publicly displayed characteristics of the nine criterion below, please sign this petition as a call to action to #DiagnoseTrump.
Narcissistic Personality Disorder DSM IV Criteria:
Definition: A pervasive pattern of grandiosity (in fantasy or behavior), need for admiration, and lack of empathy, beginning by early adulthood and present in a variety of contexts, as indicated by five (or more) of the following:
(1)  Has a grandiose sense of self-importance (e.g., exaggerates achievements and talents, expects to be recognized as superior without commensurate achievements);
(2)  Is preoccupied with fantasies of unlimited success, power, brilliance, beauty, or ideal love;
(3)  Believes that he or she is "special" and unique and can only be understood by, or should associate with, other special or high-status people (or institutions);
(4)  Requires excessive admiration;
(5)  Has a sense of entitlement, i.e., unreasonable expectations of especially favorable treatment or automatic compliance with his or her expectations;
(6)  Is interpersonally exploitative, i.e., takes advantage of others to achieve his or her own ends;
(7)  Lacks empathy:  is unwilling to recognize or identify with the feelings and needs of others;
(8)  Is often envious of others or believes that others are envious of him or her;
(9)  Shows arrogant, haughty behaviors or attitudes.