Massive women's march in downtown L.A. said to be largest in over a decade 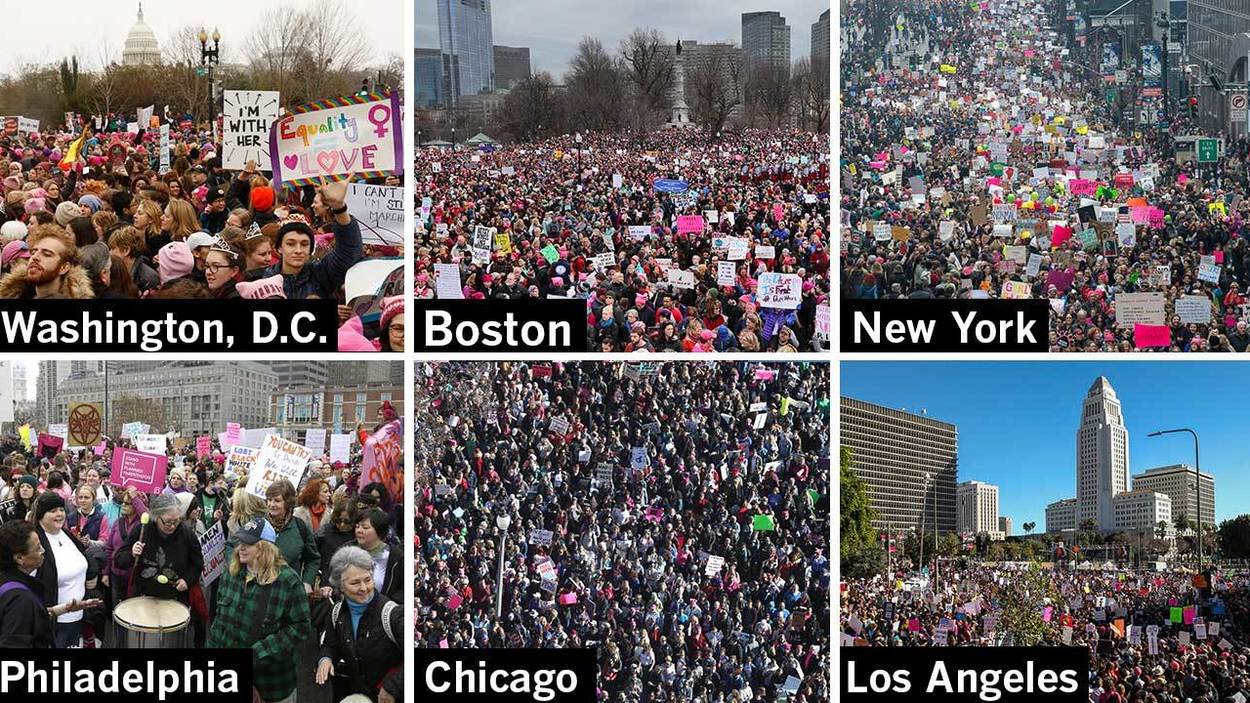 The Los Angeles Police Department was working on a crowd estimate but said the march drew 500,000 people, the largest since 2006's immigration march. Organizers, however, insisted the women's march numbers were higher. SEE THE STORY

Hundreds of thousands of people converged on downtown Los Angeles on Saturday to march for women’s rights in one of a series of demonstrations taking place across the country. Participants began gathering at Pershing Square as early as 8 a.m., and by 9:30 protesters had overwhelmed the square and filled surrounding streets. Metro trains into downtown L.A. were jammed with people headed to the march.

Participants began gathering at Pershing Square as early as 8 a.m., and by 9:30 protesters had overwhelmed the square and filled surrounding streets. Metro trains into downtown L.A. were jammed with people headed to the march.

The Los Angeles Police Department said it was still working on a crowd estimate for the march. But officials said it appeared to be the largest since a massive 2006 immigration march downtown. The LAPD estimated that march drew 500,000, but organizers insisted the number was higher.

The crowd was too large to be accommodated by the planned Hill Street march route. Demonstrators jammed the surrounding streets of Olive, Broadway and Grand Avenue, while chanting "Love Trumps hate" as they made their way toward City Hall.

Aerial footage of the march taken near Grand Park showed an astounding scene, with streets clogged with demonstrators as far as the eye could see, spilling out across the Civic Center.

The immense crowd was punctuated by bright pink splashes from hats, scarves, jackets and signs in the traditionally feminine color that has now become a symbol of defiance.

Some reported that being in a large crowd of like-minded people was an antidote to the depression they felt on Friday when Donald Trump was inaugurated as president. The march has helped them transform despair into action, they said.

“It’s going to be a revival of the ’60s, and I’m going to be a part of it,” said Anna Vastano, 57, a retired social worker. “I’m not going to sit back and in 20 years have my grandchildren say, why didn’t I do something.”

Vastano’s daughter, Alexandra, said this was her first time at a political protest. The experience, she said, has inspired her to donate money to Planned Parenthood in the name of Vice President Mike Pence, who opposes abortion rights.

Alexandra Vastano, 25, who works in health insurance and has a master’s degree in public health, was already thinking about going to law school. Now, she said, studying for the entrance exam has become a high priority because of her determination to fight Trump’s agenda.

A group of five friends, most in their early 30s, said they had never joined a protest until Saturday. They said that for them, the march will be the first step toward taking action instead of just expressing themselves on Facebook.

Sarah Onheiber, 33, an animator, said that as a working mother she doesn’t have much time to volunteer, but she now plans to donate money to causes she believes in. She is inspired by her daughter, who is almost 3.

“I can’t imagine her not having the same rights I have,” she said.

Despite the size of the crowd, officials said the event was proceeding in an orderly fashion and that no major problems were reported.

The march began at 10 a.m. under sunny skies and was scheduled to wrap up by 4 p.m.

Organizers have emphasized that the march is not simply a protest against the new Trump administration.

“We stand together in solidarity for the protection of our rights, our safety, our health, and our families — recognizing that our vibrant and diverse communities are the strength of our country,” the organizers said in their mission statement. “In the spirit of democracy and honoring the champions of human rights, dignity, and justice who have come before us, we join in diversity to show our presence in numbers too great to ignore. We stand together, recognizing that defending the most marginalized among us is defending all of us.”

The march was led by an all-female motorcycle group called the East Side Moto Babes.

The engines of the bikes roared along with the cheering crowd. At the head of the march was singer Miley Cyrus.

The crowd chanted, "This is what democracy looks like” and “Hey, hey, ho, ho, Donald Trump got to go.”

After Metro reported early Saturday that several of its subway and commuter rail stations — including those in Orange County — were jammed and, in some cases, overwhelmed with passengers trying to get to the downtown L.A. march, the transportation authority announced it was adding trains on some of its lines. Many were crowded to capacity, as were stations along the Expo, Blue, Red and Gold lines. Some inner-city bus lines also were packed.

Erica Zeitlin said she caught the Expo Line in Santa Monica, but it took nearly an hour before there was a train available with enough space to accommodate more passengers.

“Metro could have put on 10 times as many trains, and they’d be busy,” she said. “The platforms are packed.”

The rail lines were so packed that some Culver City passengers said they had to travel west to Santa Monica before they were able to board a downtown-bound train.

Expo Line passenger Angela Duffy said the Culver City station was so packed that she decided to walk to the Palms station. But that station also was crowded, so her group headed to the Santa Monica station.

“It is worth doing it to stand with my fellow women in solidarity,” Duffy said. “Change needs to happen. … If I just sat at home because I didn’t want to get into the crowds, I would not be standing up for what I believe in.”

Brenda Tullo stayed up late crocheting one of the hats for her daughter, Allison, then rose before the sun came up to drive to downtown L.A. from San Bernardino.

“I’m doing this for the women who came before me, who gave me the privilege to do everything I do today,” said Allison Tullo, 24, who works at a coffee shop. Her aunt and grandmother went to a different women’s march in Ventura.

Trump has insulted just about everyone who isn’t a white man, she added.

“I am a nasty woman,” she said, referencing an insult Trump directed at his Democratic opponent, Hillary Clinton, during a presidential debate. Her pink sign read: “Nasty women unite.”

Many of the handmade signs carried by protesters referenced women’s rights, including abortion rights. Some were directed at Trump.

“Trump, putting the bully into the pulpit,” read one sign. “Keep your tiny hands off our rights,” read another.

Others sought to turn the conversation in a positive direction: “Tweet Love, Tweet Peace,” read the sign carried by Andrea Testa, 52, a real estate agent from Long Beach.

“Tweet some hope is all I want, dude,” she said.

Sisters Yolanda Ramirez, 65, and Jo Ann Ramirez, 66, were part of a group that traveled from Downey and Santa Ana to attend Saturday’s rally. “This is my first rally,” said Yolanda, who held a sign reading, “Pres. Trump, Please Lead Do Not Bully.”

The sisters said they decided to attend the rally days after the Nov. 8 election, and took the Metro line early Saturday to the event. They are marching to represent women “who have no voice,” Jo Ann said.

“It’s for the disenfranchised,” she said of the L.A. rally.

Gabriela Macias, 41, of Venice, stood holding a pink neon sign that laid out her four-year plan on dealing with President Trump and his administration:

"Hopefully not forever," Macias said with a chuckle.

Macias came out to the women's march to stand in solidarity with the various groups that are fighting for different causes, including immigration rights.

"It's very inspiring to see the turnout,” she said. "It's good to see everybody together."

Macias had come to the march with her 12-year-old daughter, Abril Lopez. She said she taken her daughter to the massive immigration rally in 2006.

"She was in a stroller," she said.

Macias said she wants her daughter to feel comfortable about demonstrating for a cause.

"The next generation has to be comfortable to stand up and make demands," she said.

Victoria Bernal, who is in her 40s, said she drove from La Puente at 7:15 a.m. and arrived at the parking lot on Olvera Street, which she said was filling up.

She said the attendant told her most of the spaces were being taken up by people coming to the march. Bernal walked along Broadway holding a sign that read, “We should learn from history not repeat it.”

“I’ve never been so scared for the country,” she said. “Don’t set back immigration rights; don’t set back women’s rights and gay rights.”

Bernal said she has been to other demonstrations and decided to attend Saturday’s march to support human rights and the groups that are standing up against Trump’s rhetoric.

She said that though she is worried about what kind of changes will take place under the Trump administration, she feels optimistic.

“It makes me feel better to know there are people who are just as upset as I am, and that gives me hope.”

Dean Hezen, 26, of Canada, was in town for work and decided he would buy a pair of heels and join in the march.

“It’s women's rights! How could I not march for that,” he said.

As he marched, he held a sign that read, “Walk a mile in her shoes.”

“Power to you for walking in heels,” one woman told him.

“Power to you for wearing them,” he responded to her.

Many teens and children were spotted in the crowd gathered at Pershing Square.

The throngs included the Miller family from North Hollywood. Wearing a New York Yankees hat, Andy Miller, 55, took the Metro line with his two daughters. The crowded trip on the subway, he said, felt like a New York experience.

Savannah Miller, 14, and Jessie Miller, 12, said they regularly read news sites like BuzzFeed and listen to the radio.

Savannah said she was marching because she wants the world to be “safer for girls.”

“Donald Trump has to make sure to be careful,” she said. “A lot of people aren’t happy.

“I want more women in the House and Senate,” she added.

The large crowd, Jessie said, shows what women can do when they work together.

Skies were clear Saturday morning. The National Weather Service said clouds will come in the afternoon, with a 50% of rain after midnight. The high will be about 60 degrees.