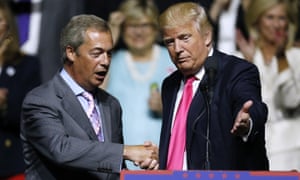 Nigel Farage forged his friendship with Donald Trump after speaking at a campaign rally in Jackson, Mississippi.Photograph: Jonathan Bachman/Getty Images
Nigel Farage: ‘Donald Trump was like a big silverback gorilla’
Nigel Farage is anticipating an invitation to Donald Trump’s inauguration as the 45th president of the United States, sources have indicated, as it was confirmed the interim Ukip leader is poised to launch an eighth bid to become an MP.
While the UK government plans to invite the president-elect to meet the Queen at Windsor Castle, the outgoing Ukip leader hopes to fly to Washington to see Trump being sworn-in on 20 January.

His presence at the event would, Ukip sources said, be further evidence of Farage’s close relationship with Trump, who earlier this month defeated Hillary Clinton in the US presidential election

It would also further irk No 10, which has rejected Farage’s offers to act as a go-between with the Tump administration. Farage and his Ukip colleagues were the first British political figures to meet Trump following his election after supporting the billionaire during his campaign.

Asked if Farage expected to attend the inauguration, a source close to the MEP said: “Trump’s personal loyalty is such that, whether No 10 like it or not, the relationship between Trump and Farage is unlikely to wither on the vine.”

The inauguration, which marks the formal transition of power from Barack Obama to Trump, will take place on a stage on the steps of the US Capitolbuilding.

Up to 1m tickets are sent out for the event that are colour-coded to denote how close guests will be to the stage: blue, yellow, orange, purple or silver.

Obama will be expected to attend the ceremony before being escorted from the White House by Trump and his wife Melania.

The event is likely to be held amid demonstrations over sexist and racist comments made by Trump during his controversial and often inconsistent election campaign.

Trump’s transition team has rewarded loyalists with posts in the new administration, rather than trying to unite the Republican party or appoint people based on their experience or qualifications.

Farage and fellow Brexiters Arron Banks, Andy Wigmore and Raheem Kassampulled off a PR coup by flying to Washington last Saturday to be photographed with the president-elect in front of his gold and diamond-encrusted elevator.

May’s attempts to woo Trump have so far reportedly fallen flat. The president-elect left civil servants befuddled during a 10 minute phonecall with the prime minister by extending an unusual and un-presidential invitation to May.