Anti-Trump protesters take to L.A.'s streets for a fifth day 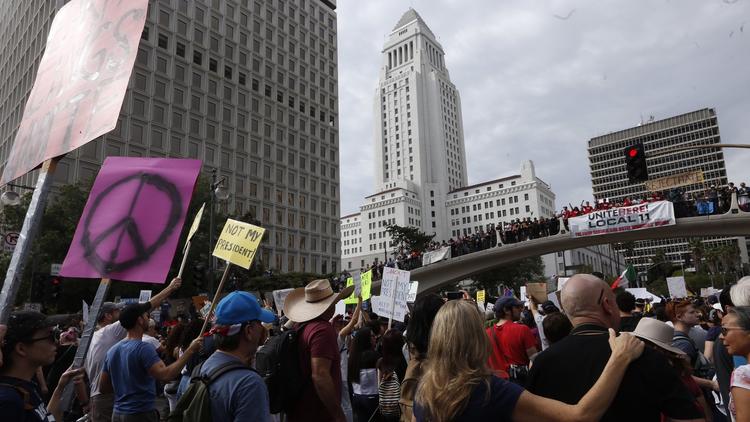 Thousands of marchers took to the streets of Los Angeles on Saturday to protest the election of Donald Trump as president of the United States. 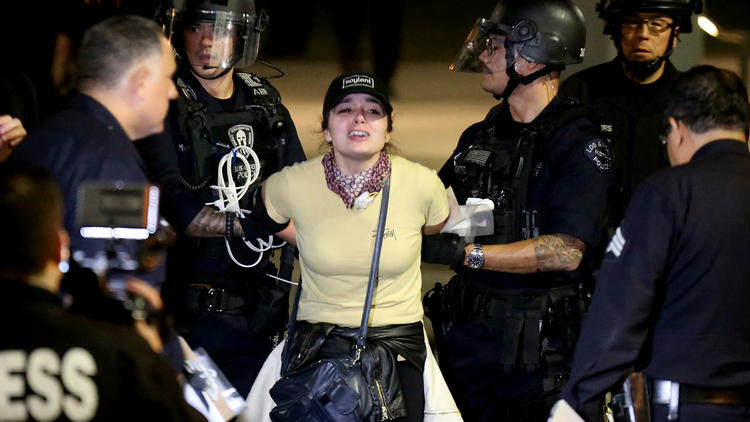 It marked the fifth day of demonstrations in cities nationwide over Trump, a Republican who shocked conventional political wisdom by defeating Democrat Hillary Clinton Tuesday. Trump's attacks on people who are in this country illegally and his comments about women, among other things, brought many of the protesters to the streets, they said.

An anti-Trump protester scales a fence at Grand Park in Los Angeles to avoid being arrested by police in the early morning hours Saturday.
More photos here.

Guarav Shenoy stood outside his car near the intersection of Figueroa and 5th streets, watching the protesters chant: "Not my president."

Shenoy, 27, said he had been waiting for more than 30 minutes.

"I don't mind being stuck in traffic as long as it's for democracy," said Shenoy, a USC alum who was headed toward the campus.

"[Trump] ran a campaign on divisiveness and hatred,” he said. “But now that he has been elected, I hope he can be more of a president and do something to unite the country.”

Nearby, Jose Marcea stood near his car watching the march. He too had been waiting in traffic for 30 minutes, he said. Behind him, rows of cars and buses were idling.

“This is OK, I’m OK with all this,” said Marcea, 44. “ I think it’s important that people express how they feel. It’s a free country, after all.”

Marcea, who lives in Van Nuys, said he was bothered by Trump's victory.

“This is hard to take in, I mean it bothered me what he said about deporting 11 million illegal immigrants and all the offensive things he has said about everyone, including women.”