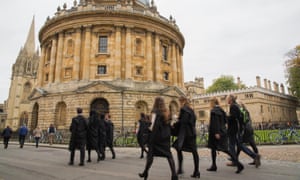 Exclusive: Almost 300 claims against staff have been made in six years, but victims and lawyers say those are just tip of iceberg

Sexual harassment, misconduct and gender violence by university staff are at epidemic levels in the UK, a Guardian investigation suggests.

Freedom of information (FoI) requests sent to 120 universities found that students made at least 169 such allegations against academic and non-academic staff from 2011-12 to 2016-17. At least another 127 allegations about staff were made by colleagues.

But scores of alleged victims have told the Guardian they were dissuaded from making official complaints, and either withdrew their allegations or settled for an informal resolution. Many others said they never reported their harassment, fearful of the impact on their education or careers. This suggests that the true scale of the problem is far greater than the FoI figures reveal.

“These numbers are shocking, but sadly, from our experience, are just the tip of the iceberg,” said Dr Ann Olivarius, senior partner at the law firm McAllister Olivarius. “Sexual harassment of students by staff members has reached epidemic levels in British universities. Most universities have no effective mechanism to stop staff from pressuring students into sexual relationships, and when it happens, any sort of disciplinary action is pretty much nonexistent. Those in charge are often colleagues who have many incentives not to intervene.

“Young women are often terrified about the consequences if they make a complaint about a staff member. So often, when they do, the university’s chief concern is to downplay any wrongdoing and protect its own reputation by keeping the whole thing quiet.”

Anna Bull, co-founder of the 1752 Group, set up to address staff-student sexual harassment in higher education, said: “There is evidence to suggest that the actual figures in the UK will be staggering. The Association of American Universities undertook a detailed survey of sexual assault and sexual misconduct in 2015 (student-student and staff-student). Surveys were completed on 27 campuses, with 150,072 students responding. The survey found reporting rates for sexual harassment – staff and student – [were] 7.7%, and only 28% of even the most serious incidents are reported to an organisation or agency.”

Oxford University reported the highest number of allegations against staff by students, with 11 received by its central administration and 10 by colleges – though it said there may have been duplication between college and central administration figures. It was followed by Nottingham with 10, Edinburgh with nine, University of the Arts London (UAL) and Essex with seven and Cambridge with at least six.

Oxford also had the most staff-on-staff allegations, with 17 recorded centrally and three by colleges – though again, there may be duplication. Next was Cambridge with at least seven, Portsmouth with six, and Exeter, York and LSE with five each. Nottingham and Goldsmiths said they had fewer than 10.

Only five universities said they had compensated students. Goldsmiths, University of London, which has been criticised for using non-disclosure agreements in settlements, paid out the most – £192,146 – followed by UAL, which gave about £64,000 to two students, plus an undisclosed sum to a staff member over an allegation of sexual harassment by a colleague.

Legal experts and campaigners have cautioned that universities reporting a high number of allegations and investigations are not necessarily those with the worst problems. Indeed, higher figures might reflect that procedures there are more effective.

A junior female member of staff at a university in southern England told the Guardian she had tried to raise concerns about sexual harassment in her department for five years, but no manager she contacted had taken action. “The worst thing is that there are many people who are suffering under this professor. Simply putting in a formal complaint will not do anything but make life hell for me and other women. He will never be fired. Everyone I have spoken to confirms this.”

A graduate student who was sexually assaulted by a senior academic told the Guardian that her university in southern England had pressured her to drop her complaint. She said: “They offered me a settlement on the condition that I drop out of the programme and accept that no internal investigation on the member of staff would take place.

“When I refused, they were forced to conduct an independent investigation; however, the investigation didn’t feel independent at all. In the end, none of my complaints were upheld, despite all the evidence of the member of staff’s behaviour towards me. The investigator concluded that the senior member of staff and I were ‘friends’, and that he had simply tried to ‘help’ me. The member of staff still has his post in the institution, he is still teaching and supervising students, whereas I am not even attending the campus, and I am completing my studies remotely.”

Her complaint is now being investigated by the Office of the Independent Adjudicator, which assesses whether universities have correctly followed their procedures.A senior lecturer at a university in the north of England told the Guardian she had raised an allegation of sexual harassment against a co-worker as an informal complaint but was told it would have to be treated as a formal grievance. The university went ahead with its own investigation and said it had found evidence of a relationship between the complainant and the accused, so it could not be sexual harassment. She denies there was any relationship. She was asked to withdraw her complaint in order to keep her position.

Another 109 staff-on-staff cases were investigated, of which almost all were internal investigations. A further 48 staff left their university or changed jobs following allegations that they had sexually harassed colleagues.

Although only three universities – Goldsmiths, Liverpool John Moore and Plymouth – reported using non-disclosure agreements or confidentiality clauses in settlements, victims and experts said payments were often classified as being made for other types of misconduct, such as poor supervision or behaviour, to protect universities’ reputations.

Edinburgh and LSE recorded the highest number of staff who left or changed jobs following allegations, with five apiece.

The barrister Georgina Calvert-Lee, of McAllister Olivarius, said she knew of a case where a university investigator had downgraded a female student’s allegation of sexual harassment against a professor to a failure to report a consensual relationship. This avoided the need to take the matter before a staff tribunal, and the academic had found a job at another university. In another case, she said, the university administration had stepped in to persuade an academic accused of sexual assault to leave with a financial settlement and a non-disclosure agreement.

Although most universities have policies on staff-student relationships, few record how many there are, raising questions about how such relationships are monitored.

Legal experts and academics who examined more than 30 policies for the Guardian found none forbade such relationships and few discouraged them. Calvert-Lee said: “None of them really tackle the issue squarely and clearly. The one that surprised me in its blatant disregard for the weaker party was Lincoln College, Oxford, which says overtly that the reason that it wants a reporting of these relationships is to ensure it will not have an adverse effect on the reputation of the college.”

The college said in a statement: “The college’s policy is to ensure it is informed of any relationships between employees and students that are inappropriate. This is for the protection of the people involved as well as the college.”

Prof Nicole Westmarland, who led an independent inquiry into the University of Sussex’s handling of domestic violence, said: “It is the tip of the iceberg. Since being involved in the Sussex review I have had people from many other universities coming forward and telling me about their experiences and equally I’ve had other universities ask: was this just Sussex? And my answer is absolutely it isn’t.”

Olivarius, whose law firm represents people who have been sexually harassed in the US and UK, called for a mandatory national system to tackle sexual harassment by staff based on the Human Rights Act and the Equality Act to replace “the current hodgepodge of systems”. She said: “There must be a ban on any sexual contact between university staff and all undergraduates, and between staff and graduates in the same field. The penalty for violating the no-contact rule should be swift termination with a public statement and a mandated report to a central UK registry.”

A University of Oxford spokesman said: “A wide-ranging campaign across the university in recent years has made clear that sexual assault and harassment, whether by staff or students, will not be tolerated anywhere at Oxford. We see the number of students now coming forward to disclose or report incidents as reflecting the progress made.”

The pro-vice-chancellor for education at the University of Cambridge, Prof Graham Virgo, said: “It is a very significant challenge for people to disclose sexual misconduct or harassment; as a result we have designed the procedure with student choice at its heart, so students can choose for their complaint to be heard in a way that suits them.”

Stephen Marshall, university secretary and registrar at UAL, said: “There is no place for sexual harassment or gender-based violence at UAL. We are already working hard to improve how we handle and prevent incidents of harassment.”

A University of Nottingham spokesperson said: “There have been no such allegations from students, relating to university staff, in the past three years and less than 10 incidents in the two years prior to this. Similarly with regards [to] allegations of staff from staff there have been less than 10 allegations in the last five years. Clearly our range of initiatives and policies around this issue is helping to drive this message home.”

A University of Essex spokesman said: “We have a zero-tolerance policy regarding sexual harassment and have robust procedures in place for students and staff to report instances of sexual harassment.”

A University of Edinburgh spokeswoman said: “We recognise that, on occasion, there will be legitimate complaints that individuals wish to raise and we actively encourage the reporting of concerns and maintain an effective complaints procedure for that purpose.”