£220,000: the price super-rich will pay to keep their privacy - da série Esquizofrenia Social

£220,000: the price super-rich will pay to keep their privacy - da série Esquizofrenia Social 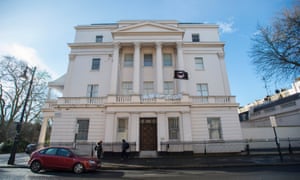 This £15m mansion in Eaton Square, recently squatted, is reportedly owned by the Russian billionaire Andrey Goncharenko via a company. Photograph: David Mirzoeff/PA

More than 200 wealthy foreigners are choosing to pay £218,200 a year in tax rather than declare which of London’s £20m-plus mega-mansions they own.

The government introduced a special annual tax on homes owned via “non-natural persons” such as offshore companies in 2013, to crack down on “dirty money” used to secretly buy up luxury homes. But figures from HM Revenue and Customs show owners of mega-mansions are choosing to pay the annual tax rather than register their London properties under their real names. There is nothing illegal in owning a property via an offshore company.

Jamie Morrison, an accountant who advises the super-wealthy, said that for many of his clients “privacy is more important than paying the tax”. Morrison, a partner at accountancy firm HW Fisher, said: “If you have people who own a £20m property and they have to pay £220,000 a year to stay private, it’s not enough to necessarily hurt you. It is a huge amount, but if you’ve got a property worth £20m it is not much in the grand scheme of things.”

There are 210 UK properties worth more than £20m owned by an offshore company or other “non-natural person” vehicle, according to 2015-16 HMRC tax receipt data. The number has fallen by less than 5% since the annual tax on enveloped dwellings (Ated) was introduced by David Cameron’s government in 2013. Ated on the £20m-plus properties brought in some £44m for the government in the last financial year, up from £25m when the tax was introduced in 2013-14. Total tax receipts on all enveloped properties worth more than £1m came in at £178m.

The UK’s most expensive house, Hanover Lodge in Regent’s Park, London, which was sold by the former Conservative peer Lord Bagri for £120m in 2012, is owned by a Gibraltar-registered company, Green Palace Gardens Limited. It has been reported that Russian billionaire Andrey Goncharenko owns it and several other luxury homes in London, including the £15m Eaton Square mansion recently taken over by squatters. The Observer attempted to contact Goncharenko, an executive at the Russian-government-owned energy company Gazprom, to ask why he continues to hold the properties via companies even though his ownership is widely known.

Twenty apartments in One Hyde Park – the super-luxury Knightsbridge complex developed by Christian Candy – have been sold for more than £20m each and are owned by offshore companies, according to an Observer analysis of Land Registry records. The most expensive flat in the development was sold to a British Virgin Islands-based company, Water Property Holdings Limited, for £135m in 2011. The property spans the top three floors of one block, and consists of two flats which were knocked together.

The Metropolitan police have said that more than £180m of British property held by offshore vehicles has been put under criminal investigation in the past decade as the likely proceeds of corruption. One example of London property being used to allegedly launder the proceeds of corruption occurred in the case of James Ibori, the former governor of Delta state in Nigeria, who was jailed in 2012 on money-laundering and corruption charges which involved him taking £50m while in office. A mansion in Hampstead, north London, that he bought with £2.2m in cash, as well as a home in Dorset, were included on a list of assets prosecutors want to confiscate.

Naomi Heaton, chief executive of London Central Portfolio, which owns and manages more than 500 properties across Mayfair, Belgravia, Knightsbridge, Kensington and Chelsea, said privacy trumps cost for wealthy overseas visitors to London. “It may not be comprehensible to the average person, but for people coming here – particularly from certain countries – having people not knowing about your wealth is the most important thing,” she said.

Financial transparency campaigners said that until everyone was forced to publicly declare their property assets international criminals might still be able to abuse the system to move dirty money into the country. “When it comes to super-rich criminals, secrecy is worth more than cash,” said Chido Dunn, a senior campaigner at Global Witness.