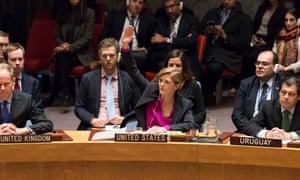 Samanta Power, the US ambassador to the UN, raises her hand to indicate US abstention from voting on the security council resolution to condemn Israeli settlements. Photograph: Albin/Pacific/Barcroft Images

Netanyahu allies claim ‘iron-clad information’ from Arab sources reveals Obama administration drafted document to end settlements, which US abstained from Israel has escalated its already furious war with the outgoing US administration, claiming that it has “rather hard” evidence that Barack Obama wasbehind a critical UN security council resolution criticising Israeli settlement building, and threatening to hand over the material to Donald Trump.

Israel has escalated its already furious war with the outgoing US administration, claiming that it has “rather hard” evidence that Barack Obama wasbehind a critical UN security council resolution criticising Israeli settlement building, and threatening to hand over the material to Donald Trump.

The latest comments come a day after the US ambassador to Israel, Dan Shapiro, was summoned by Netanyahu to explain why the US did not veto the vote and instead abstained.

The claims have emerged in interviews given by close Netanyahu allies to US media outlets on Monday after the Obama administration denied in categorical terms the claims originally made by Netanyahu himself.

However, speaking to Fox News on Sunday, David Keyes – a Netanyahu spokesman – said Arab sources, among others, had informed Jerusalem of Obama’s alleged involvement in advancing the resolution.

“We have rather iron-clad information from sources in both the Arab world and internationally that this was a deliberate push by the United States and in fact they helped create the resolution in the first place,” Keyes said.

Doubling down on the claim a few hours later the controversial Israeli ambassador to Washington, Ron Dermer, went even further suggesting it had gathered evidence that it would present to the incoming Trump administration.

“We will present this evidence to the new administration through the appropriate channels. If they want to share it with the American people, they are welcome to do it,” Dermer told CNN.

According to Dermer, not only did the US not stand by Israel’s side during the vote, it “was behind this ganging up on Israel at the UN”.

On Monday, Trump tweeted his displeasure with the UN, dismissing it as “just a club for people to get together, talk and have a good time”.

Dermer is a controversial figure in Washington, blamed by the Obama administration for organising the invitation for Netanyahu to address the US Congress in the midst of Israel’s campaign against the Iran nuclear deal.

His comments on CNN seem to represent an even more egregious breach of protocol, not least over the vague sourcing of the evidence alluded to by Keyes and Dermer.

Indeed, Israel was accused by unnamed US officials in a Newsweek article two years ago of “very sobering … alarming … even terrifying” levels of espionage targeting the US refuted as a “ malicious fabrication aimed at harming relations” by then foreign minister Avigor Lieberman.

Last year, however, US officials again accused Israel of spying, this time on the Iran nuclear talks, with one telling the Wall Street Journal: “It is one thing for the US and Israel to spy on each other. It is another thing for Israel to steal US secrets and play them back to US legislators to undermine US diplomacy.”

Dermer’s threat on CNN to hand information to Trump would seem to replicate some of those concerns.

Israel’s threat to present “evidence” on a sitting president, and one of Israel’s closest ally, to an incoming presidential team – and to do it so publicly – appears almost unprecedented.

The moves appear part of a high risk – and even more highly partisan strategy – on Netanyahu’s part, tying the future of Israel to a highly unpredictable Republican president-elect with no experience of public office and who comes from the very fringes even of the party he stood as candidate for.

The US has already denied the claim made by Israel in the strongest terms.

“We did not draft this resolution; we did not introduce this resolution. We made this decision when it came up for a vote,” said Obama’s deputy national security adviser Ben Rhodes said in a statement on Friday.

But because of its opposition to settlement activity and concern for what it could mean for the region, the US “could not in good conscience veto”, he added.