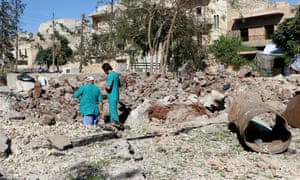 Locals inspect the area around the Sahra hospital in Aleppo after a barrel bomb strike by Syrian government forces in October. Photograph: Anadolu Agency/Getty Images

To complete the infamies of 2016, now comes Bashar al-Assad’s impending victory in Aleppo – today’s Guernica, even if there is no Picasso to depict it. Events in Syria define the arrival of a new barbarism. Even in the most terrible days of 20th-century conflict, combatants would respect minimum rules. Civilians were not surrogates for the enemy. Organisations such as the Red Cross – independently and impartially alleviating suffering on either side on the basis of no other value than human need – were allowed to do their work.

No more. Aleppo completes a new, dark contemporary arc that trashes respect for humanitarian principles that once seemed inviolable. Assad has achieved his re-conquest of Syria’s second city by completely dropping the once iron-clad distinction made in the Geneva conventions between combatants, non-combatants and those “hors de combat”.

Bombs, even banned barrel bombs, must fall where they will; preventing non-combatants from getting food and medicine has been integral to the war effort; hospitals, even children’s hospitals, are routinely bombed. Assad has even legislated to define the provision of medical care in rebel areas as criminal. The brave White Helmets, the volunteers who try to relieve suffering in rebel and non-rebel areas alike, may be arrested and killed as surrogate terrorists. The scale of population displacement, death and suffering has reached unbelievable heights – but western powers have turned a blind eye.

Yet what is at stake goes beyond geopolitics and western interest. The west is turning its back on the concepts not only of a just war, but on the fashion in which wars should be fought – fundamental to western and, indeed, universal values. For centuries, humanity has come to accept that limitless war is bestial. There must be rules and protocols. Hence the just war doctrine that wars should be fought as a last resort in self-defence, proportionally, waged by lawful authority and have some reasonable chance of success.

The Geneva conventions build on the just war philosophy. Signatory countries accept minimum rules for the treatment of not just prisoners and wounded combatants – but for civilians in war zones. The conventions create the critical division between combatants and non-combatants along with those hors de combat – who should not be included in the conflict and to whom basic humanitarian assistance is allowed. Hospitals, for example, should not be attacked. The first convention was signed in 1864, and offered the legal space for the Red Cross, which had been founded a year earlier by Swiss humanitarian Henry Dunant.

It is that entire structure that is now toppling. Assad – and Putin – justify their barbarism by insisting that any action is justified to contest terrorism. If they were to argue in just war terms, they would say the nature of Islamic terrorism has transformed any conception of proportionality. Anything now goes. Thus in Aleppo, over the last four months, a hospital has been attacked every day but one. This has to be condemned. If we are to accept that war and the way it is waged has no limits, that would be to take back civilisation to pre-history.

All this is not to underestimate how close to impossible it is to navigate the Syrian conflict with any ethical compass. There can be no justification in joining Russia to bolster Assad and create an Iranian-led Shia protectorate running from the Lebanon through Syria to Iran, confronting Israel and Saudi Arabia alike. Equally, backing the rebels, intensifying the civil war, is to open up Syria to become a base of operations for Islamic terrorist groups such as Isis. To attack Isis is perforce to strengthen Assad. Nor is it in the western interest to offer unqualified support to Saudi Arabia, which sponsors some of the most regressive Islamic religious ideologies. No option is attractive: any intervention is likely to be self-defeating.

And yet the west cannot allow the edifice of the just war and the Geneva conventions to fall. To bleat for peace talks or condemn both sides while doing nothing is a cop out. As an absolute minimum, we have to insist the Geneva conventions are upheld in the conduct of war in Syria. We cannot allow the argument that terrorism means the distinction between combatant and non-combatant is dropped. There must be accountability for attacks on hospitals, particularly children’s hospitals. It is not good enough to charge that terrorists were hiding there. The use of chemical weapons, barrel bombs and drones acting on probability algorithms in areas inhabited by civilians is prohibited.

Organisations such as the International Committee of the Red Cross, Médecins Sans Frontières or the White Helmets must be allowed to do their humanitarian work on the Dunantian principles on which they are founded. Food and medical supplies must be allowed to reach civilians. Russia and Assad’s Syria must understand that they are operating beyond the limit – and that any victory won in this way can only be pyrrhic. War crimes are being permitted and indulged: Russia must be required to investigate its military and so must Syria, otherwise they should be struck out of the Geneva conventions.

Here, of course, is the rub. Both will reply that double standards are being applied. The US has flouted the Geneva conventions in its treatment of prisoners in Guantánamo and its all-embracing definition of terrorism, allowing it to treat civilians as combatants if they are suspected terrorists. They also know that president-elect Donald Trump has said he would go further – and that he admires Putin’s ruthless disregard for soft, humanitarian international treaties. They know they can, like Franco in Guernica, act with impunity.

Britain could lobby for the EU to take a robust line – but that would only be explicit recognition that leaving the EU in today’s darkening environment is a cardinal error. Leavers are hardly plausible advocates for international co-operation. And within Britain, poor weak Labour, where we might have looked in the past for leadership, is a broken reed – confirmed again by events yesterday.

It is a dreadful landscape: a world governed by Trump and Putin with no countervailing forces will see yet more atrocities. All we can do is act from below. In the absence of any government help, a “people’s convoy” of medical supplies is being sent on Saturday to build a new children’s hospital in eastern Aleppo. You can contribute on thesyriacampaign.org. It needs money. Donate for a world that once was and a world that might yet be.